Wyvern of the Year

The Wyvern of the Year Award recognises a member of the Wyvern Society who has demonstrated exceptional and outstanding service to the community, and who have selflessly given of themselves in a way well in excess of what might normally be expected by a person in their position.

Nominations are accepted until June 30th each year, with the award presented at the annual Wyvern Dinner in October.

Some of the incredible and selfless Wyverns who have recently received the award are:

An astonishingly humble yet hugely respected member of the College community, David is a truly generous and unfailing supporter of Wyverns and current students alike. David has mentored students, held committee positions as former deputy Arch Wyvern, and was instrumental in launching the Wyvern Ball and reviving Wyvern Dinners. He was the perfect choice to sum up the collective feelings of the community at the memorial service for former Vice-Master Jack Clarke.

David’s ready wit, energy, and insight have helped make Laughing Matters, the corporate comedy business he runs with fellow Wyvern Jo Gill, extremely successful. His College friends also remember him for his kindness, tolerance, and inclusivity: qualities which he still displays, and which have shaped his achievements.

David is passionate about improving childrens’ literacy, especially in remote Indigenous communities. He has authored 11 books for young readers which explore the themes of bullying, racism, leadership, teamwork, and support, and use a sporting backdrop to engage normally reluctant readers. His AFL-inspired Fox Swift series was co-written with Cyril Rioli, while The Stormy Protest won the 2019 Children’s Environmental Award. As an Ambassador for the Indigenous Literacy Foundation, he has facilitated Creative Initiative writing workshops with students from the Tiwi Islands and Katherine, helping them to write and publish stories such as Japarrika and Japarrika Rises, and the Damo Makes His Mark series. These initiatives have helped young Indigenous women and men create (produce stories), cultivate (build knowledge) and motivate (grow self-esteem). In characteristic style, though, David sees this inspirational work as a privilege, counting himself lucky to be able to do what he loves. 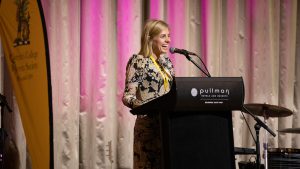 Kristen Hilton (1992) is the Victorian Equal Opportunity and Human Rights Commissioner and from her time growing up in Kyabram to her appointment to the VEOHRC, Hilton has always been passionate about social justice.

Kristen works tirelessly to create a more tolerant, diverse and socially aware society that is better prepared to confront injustices. Through her various appointments at community legal centres and other socially-minded justice movements, she has been at the forefront of the Royal Commissions into family violence and institutional child sex abuse; the opening of Victoria’s first gay pride centre; the commitment of Victoria Police  to eliminating sexual harassment; the NDIS is roll-out; and assisting major sporting codes in confronting issues of diversity and racism.

She sees an important part of her role as getting out of the CBD and talking to people across Victoria – in Mildura and Morwell and Shepparton and Werribee – what it should mean to feel connected, enabled and hopeful. The language of human rights does not always resonate with people but Kristen wants to find a common language to express the importance of living lives of dignity, respect and value. In her own words: 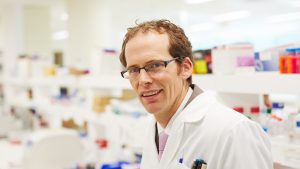 Associate Professor Andrew Weickhardt attended Queen’s College from 1996-1998, and was the Student Club President in 1998. He completed his MBBS with Honours at the University of Melbourne in 2002 as the highest ranked student. After completing residency and basic physician training at The Royal Melbourne Hospital, he went on to do advanced training in medical oncology, obtaining his FRACP in 2009. He also completed a DMedSc at the University of Melbourne investigating acquired resistance to targeted therapy in cancer, before spending two years at the University of Colorado in Denver doing a clinical post-doctorate. He now works as a medical oncologist and translational scientist at the Olivia Newton-John Cancer Centre at the Austin Hospital, leading the genitourinary cancer team investigating new ways of using immune therapies to treat bladder, prostate and kidney cancer. 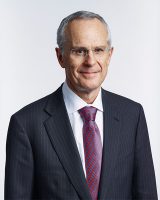 Rod Sims is the current chairman of the Australian Competition and Consumer Commission (ACCC), having held the position since 2011. As a resident, Rod was an integral member of our back-to-back intercollegiate tennis premiership team and participated fully in all areas of College. His illustrious career in the public service, from working as the Principal Economic Advisor to Prime Minister Bob Hawke to his current position as head of the world-leading regulator, made him a deserving recipient of the 2017 Wyvern of the Year Award.

While you can find many Wyverns on Collins Street overlooking Melbourne’s CBD, you will struggle to find the recipient of the 2016 Wyvern of the Year Award. Lauren George has devoted her time to establishing the Steven Tito Academy in Tanzania, a capstone for her work teaching English in rural Tanzanian communities. She began planning her first trip to Tanzania as a resident on 3J and regards Queen’s as a major source for her work.

Few people have had a similar impact on the law and everyday life of Australians as The Honourable Marcia Neave AO. Marcia was the first academic to be appointed directly to the role of Justice of Appeal, Supreme Court of Victoria, Court of Appeal. This judicial position was bookended by remarkable work in law reform, as the Foundation Chair of the Victorian Law Reform Commission, and more recently as Commissioner for the Royal Commission into Family Violence. Her work has been incredibly important and The Wyvern Society were proud to make Marcia the 2015 Wyvern of the Year.

Mr Donald (Scotty) Macleish was the first Australian traveller of the James IV Association of Surgeons in 1973 and became the association’s first Australian member in 1981. He served as a member of the Royal Melbourne Surgical Teams in South Vietnam, treating soldiers and members of the local community. A giant of Australian medicine and a humble philanthropist, Scotty was a very deserving recipient of the inaugural Wyvern of the Year Award. The College mourned his passing in 2017.

Members of the Wyvern Society are eligible to nominate a candidate for the award and an individual can submit multiple nominations, including for themselves. Nominations will only be accepted if they are completed using the official form and submitted to the Wyvern Society committee either by postal mail or via archwyvern@queens.unimelb.edu.au.

Nominations are open to 30 June each year.

Nominees and nominators must be members of the Wyvern Society, being one of:

Recipients must be members of the Wyvern Society and have demonstrated exceptional and outstanding service to the community. They must have also demonstrated persistent commitment and their achievement(s) must have had lasting positive impact.

The Wyvern Society Committee forms a selection subcommittee to assess nominees and propose a winner for Committee endorsement. Preference is given to recent contributions or achievements. An award will not be made if, in the opinion of the subcommittee, there is no suitable candidate.